So I didn't exactly forget Memorial Day. It's just that I live too far away from the cemetery's where my ancestors are buried to visit them and pay my respects very often. However, I did spend some time thinking about those who had gone before, especially my father. He died when I was thirteen. A sudden heart attack took him away from a wife and 7 little children who needed him desperately. He was tall and lean and kind and truly one of the most hardworking and selfless men I have ever known. He wanted to come a soldier and fight for liberty and truth during World War II, but a heart condition and an injury while playing high school football prevented it until the end was near.

Since he couldn't be sent directly into battle, he became part of the military police who rode the rails back and forth across the United States looking for draft dodgers and deserters. I can't imagine doing that, but it was a necessary part of the process since not everyone wanted to leave their lives of relative ease to help someone else. The last few months he spent on a Del Monte Pineapple Plantation in the Philippine Islands as a medic nursing soldiers back to health. It seemed like such a noble cause until I learned that most of the men he was helping were suffering from venereal diseases. Being young, I didn't know what he was talking about until much later.

That recollection made me think about how important the seemingly simple decisions in life can be.  It might not matter what we eat for breakfast or what we wear on a particular day, but it will matter to someone if we smile when we see a stranger, pick up a piece of litter or think before we speak. Life is about giving something back, not always wanting to be the recipient of something good or wonderful. I applaud those who hang posters on doors asking for old shoes that can be sent to those in need. I marvel at the compassion and help freely given during times of disaster, personal crisis or unrest. I feel great pride when I see the flag flying because I know millions of people sacrificed all they had so our nation could be free. I wish I could do more but need to be content with doing what I can. We choose what we will become and what we will be remembered for. Most days I just want to be remembered as being a replica of my father - minus the tall and lean, I'm afraid. Someday I will see him again, and I want him to be proud of me.

As a quick side note, you have until Friday to get the first three books in the Indecision's Flame series as a trilogy for $.99 by clicking on this link https://amzn.to/2PfLun2.  I'll tell you about book 7 in the series later. It's a must-read for everyone who believes in family, hope and forgiveness. 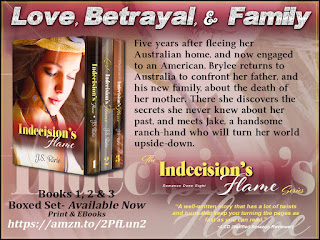