So I've been sitting at my desk for the past few hours trying to finish the final edit of my next book, Unsheltered, the forth book in the Reagan Sinclair, FBI series that I was hoping to have out by the end of the week. I'm not sure that's going to happen now because I keep running into snags with the dialogue and trying to make sure everything makes sense. It's been challenging because my main character is dealing with the consequences of some weighty decisions she's made. Her life isn't where she wants it to be, and she keeps being drawn into things that can't be controlled. It's caused me to reflect on a great many things in my personal life because it certainly hasn't turned out the way I expected. I suppose few people's lives do, but I keep looking for that silver lining that is supposed to exist in even the most difficult circumstances.

Above me is the picture of seven women, along with a plaque that reads, "Life isn't about waiting for the storm to pass . . . It's about learning to dance in the rain." These women are radiant examples of  overcoming obstacles that would make women of lesser courage fall by the wayside. I know this because they are part of my family. From my daughter to my maternal great, great, great grandmother, I see in their faces attributes I have inherited and the strength of character I would like to achieve. My daughter has lived through hard things I'm not even aware of. My mother raised a large family on her own after my father's death and kept on fighting after a complete nervous breakdown. My grandmother was a dreamer who loved to write but was never able to travel and see any of the things she wrote about. My great grandmother lived in a cave in the side of a mountain because her husband was asked to move north and settle a territory that had only been inhabited by American Indians. Her mother had traveled across thousands of miles of wilderness in a covered wagon because she wanted to live in a place where her family would no longer be persecuted for religious belief. The last woman, whom I most resemble, is Ellenor Wiggins.

I don't know much about her, but I feel a definite kinship. When I look in her eyes, I see a reflection of some of the pain I've had to bear. There is a soulful reminder that she loved deeply, tried to do her best, and probably failed as many times as she succeeded. But with the firm determination of any pioneer who is traveling uncharted courses, she knows she will survive until her time on earth has ended. It's comforting to look at the faces of these women because we are part of each other. Some of the same blood flows through our veins, and we've been a heritage to be proud of.  I know I will meet Grandma Ellenor again someday, and we'll exchange life stories. Some of them will make us cry, but there will be laughter because we will understand far more than we do now.

I'm grateful I have a desire to know where I came from. Reflecting on the lives of my ancestors and learning more about them gives me hope. It helps me identify my own weaknesses and move forward, even I don't have the strength or the courage. One of my greatest desires at this stage of my life is that at least some of the things I'm doing will make them glad I'm part of their family. I don't have to deal with the physical hardships most of them had to endure, but my challenges have been just as disheartening because I'm sure we all want, or wanted, the same things. Work we can be proud of doing. People who care. Something to believe in. And the capacity to make some of our dreams come true. It's what I want for my own posterity, and I hope I'm setting the right example. 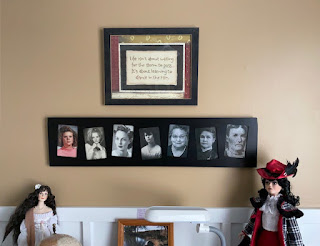