It's been another tough few days around here that have taken me to my knees more than once for some much needed relief. But as is always the case when we can look beyond the moment, there are lessons to be learned and a way opened where our faith can be increased. It is during those tender moments when  we can draw just a little closer to our Savior and be made more aware of how thin the veil really is between this life and the one that comes next.

As I wrote some weeks ago, I lost my brother the day after Thanksgiving. His life had been far from easy, and we were very close having gone through so many earthy experiences together. He was three and I was five when we left the house one spring morning to play. My mother had told me to keep my eyes on him, but it didn't take me long to become distracted. As a very curious farm boy, Sandon quickly disappeared and went to find our father who was in the field getting ready for spring planting. The noise was too great for him to hear my brother coming and when the tractor lunged forward, our father looked back to see his little coat wrapped in and out amongst the blades of the tandem disk.

With superhuman strength he was able to get my little brother out, but he wasn't breathing. When daddy came running to the house with Sandon dangling in his arms and screaming for the keys to the jeep, I hurried to see what had happened. My mother took one look at me and said, "If you had been watching him like I told you to this never would have happened."

My brother was in a coma for over six weeks, and had  been deprived of oxygen several times. Despite many prayers, he didn't awaken to a joyful, happy life. The crushing of his trachea had caused brain injury that affected the right side of his body and the accompanying motor skills that went with it. He had to learn to walk and talk and do everything over again. He was never able to do things other children took for granted, but he always fought to keep going.

He walked with a bad limp his entire life and had to have the bones in his right hand welded so it wouldn't turn under permanently. While he enjoyed many good friendships and became the father of six children, his life wasn't easy. Due to some bad choices, he ended up falling into a fire pit where he couldn't get out and spent the last twelve years of his life in a nursing home. He went through continual skin grafts and untold amounts of both physical and emotional pain that would have reduced the strongest man to tears. He eventually ended up in a wheelchair and had only one daughter who would even talk to him. My heart is still breaking because I miss him so much.

But that pain was compounded on Thursday when a friend from Branson, Missouri sent me a text saying that my friend, DiAnne, had lost her battle with cancer. For those of you who haven't read all of my blogs, I'll give you just a quick rundown on what the last ten months of her life were like.

Right after Covid restrictions started, she lost her job and her home the same day. A week later, fluid filled her lungs for no apparent reason, and she was hospitalized. By the time the doctors got the condition under control,  they found a large, inoperable mass somewhere around her trachea. She had no close family to help but decide to fight back with all she had. While living in motel room because she had no other place to go, she went through two rounds of radiation and one of chemotherapy. When I saw her in September, she was down to 78 pounds but determined to make it until I came back the next spring. I told her we would celebrate with a picnic by the lake and release balloons with her name on them into the air.

Despite all she had gone through, she was doing quite well until Christmas morning when she passed out at a friend's house, fell on her face and broke her nose. She was severely bruised and ended up in the hospital for a few days because she was dehydrated. (I'm including a picture so you can see what she looked like. She has become one of my biggest heroes.)

She was trying to move into a doublewide trailer when I last heard from her. She was excited about finally having her few belongings back but was extremely tired. I tried for two weeks to reach her by phone and text knowing something awful had happened but had made a serious error in not getting the phone number of the woman who had been helping her along the way. I may never know what happened at the end or if she spent her final moments alone, but I have learned to pay more attention to details. 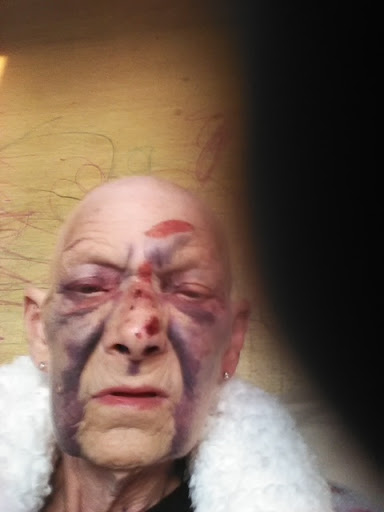 That brings me to Thursday afternoon when my son called me to say that they were putting their 16 year-old dog down on Saturday and wanted me to be with them. I'm allergic to both cats and dogs and had watched her a number of times when they were away from home. But when they asked me if I would take care of her for two years while they were living with my daughter-in-law's parents so they could pay off all the hospital and doctor bills they had accumulated while she went through stage four melanoma-lymphoma, I had to say yes. It was a tough adjustment for Ruby because she was used to sleeping with them, and I couldn't even have her in my bedroom. But it was nice having someone to talk to because I had been alone for 18 years.

I couldn't stop the tears from streaming down my cheeks as I sat with them in that quiet room and we all said our goodbyes. Ruby had come into our lives as a way to help my daughter-in-law deal with the fact that she would never be able to have a baby. She was their child, even after they adopted my beautiful granddaughter several years later, and never lost her place in the family or the love they had for her. My son is the most compassionate man in the world. He just held her in his arms and kept telling her how very much he loved her and that he would see her again soon.

It was one of God's tender mercies for me because I could see my brother opening his arms to her the minute she passed through the veil. Together they would run through the fields and be free from all the pain life had brought them through accidents and old age. I could see Ruby licking his face as they laughed together and then went off  to do some more exploring. They were both young, healthy and truly happy again. Sandon loved dogs with his whole heart but could never have one when he was growing up because any animal would bump into him and knock him down or get under his feet and make him trip.

I even had the brief thought that perhaps my brother and my friend would meet and share past experiences of pain and heartache as they learned more about what God had in store for them because they had made it though so many tough tests with faith and courage during this life.

My heart is still very tender, and I'm crying more than I usually do, but I am so grateful that I know God lives and this life isn't the end. We will be reunited with those we love and experience more glorious reunions than the mortal mind can envision. My prayers are with all of you have are going through though times of sickness, sorrow and pain. The days will get brighter, and if we don't lose hope, we will catch a glimpse of the beauties God wants us to see in even the worst of times. 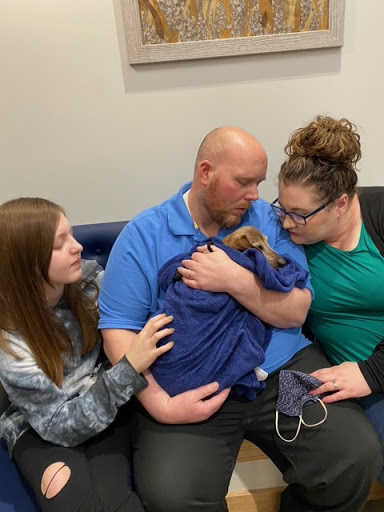