Not Always What We Expect

I was really quite shocked when I looked at this site the other day and realized that it had been almost two months since I posted anything. Now it's not that I haven't been busy since I found out my arteries were clear. I think I've been going through a sort of withdrawal because I always figured my heart was in incredibly bad shape. In fact my older sister, who had gotten down to 15 percent heart function for a still undisclosed reason, was telling all of my siblings that I was close to death's door because I hadn't been doing enough to reverse a lifelong condition. She was even visibly upset when I told her my good news because it meant that incessant exercising and watching everything that went into her mouth wasn't necessarily the secret to a long and primarily healthy life.

I was able to leave for vacation two weeks after my angiogram - with an appointment to see a vein specialist two days after I got back. The doctors still had no clear idea what was causing all the swelling in my legs and feet or the reason for my continued inability to do much without getting winded. They figured my lungs, my inverted varicose veins or my still overly-high blood might be the culprit. So I flew into St Louis feeling no better than I had for years but found great comfort being with the sister I felt closest to.

We had a great time laughing over our inability to get balls in the right pockets during games of pool, watching our favorite music videos and just being together. We spent time with friends during our side trip to Branson and were even able to hug and kiss many of them because all of the mask mandates had been lifted. We spent close to an hour in the basement of the motel where we were staying because the siren when off letting us known a tornado was about to set down. Those were fun and stimulating times. But I also had a horrid flareup with my allergies and spent several days with some kind of bug that caused explosive diarrhea without any warning. Those conditions, along with the allergy medication I was taking to keep my eyes from swelling shut and my nasal passage mostly open, made me unusually sleepy. I had to fight to keep my eyes open when we weren't doing something active or loud.

I came back far less rested than I usually did, only to discover that the veins in my legs weren't bad enough to be causing any of the symptoms I still had. The doctor put me on a diuretic and gave me a prescription to get my some support stocking - which I have yet to do. So after all the months of hoping for an answer, I felt like I was back where I started still feeling overly tired without any diagnosed reason. I was beginning to think that the doctor who blamed all my conditions on getting older might be right.

Since then, I guess I've been in a state of depression. I mowed my lawn three times, pulled every weed I could find and even got my garden planted. But something seemed to be missing until today. I think it's a sense of true gratitude for what I still have. I've been concentrating on things I may never understand rather than on all the daily blessings I'm receiving. That was brought forcefully back when I read a short story someone posted on Facebook. I can still do everything that needs to be done, even though it may take longer and require bending over rather than squatting. And the things that can't be changed won't really matter that much once I leave mortality behind. I need to be building for eternity with my Savior, my eternal Father in Heaven and the people I love, rather than putting so much energy and effort into things that can never be recovered because I have moved past the years when my body was able to adjust to my demands.

I share it with you because I would imagine that a lot of people feel as I do. The Golden Years aren't  what we expected them to be, but in many ways they aren't all bad. We have time to do things that have been neglected in the past and feel more secure in who we really are because we are no longer quite so concerned about what others think of us. As I see it, that's a huge relief since we longer have the energy to chase down all the creams, diets and exercises that are supposed to be our answer to the fountain of youth - a real myth that has only made certain people very wealthy.

That's all for now. I hope you enjoy the story. It brought me out of my doldrums and made me feel a little pretentious because I haven't been participating in my life story the way I could have these past few months. There is a season for everything, and no one is going to make it out of this life without a great many tests. After all, that's part of the reason we're here. 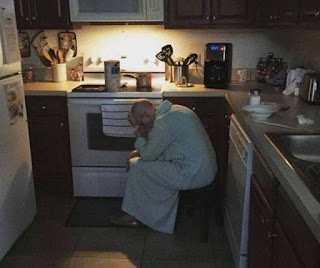 This is Sharon, my mother-in-law.
She taught me it’s important work to see someone for who they are and not what you expect.
When I first met my mother-in-law I had a hard time understanding her thick south Virginia accent.
And she seemed a little bossy in that southern passive aggressive polite way.
But I knew she was important to the love of my life, so I accepted her grudgingly as some of us do when family is forced on us.
After 5 years I still didn’t really know her.
When my wife got leukemia at 30.
When our world was shattered and changed forever, Sharon very quietly and very firmly stepped into the role she was born for.
She moved, with her dependent Vietnam vet husband, into our house and became Michele’s caretaker too.
Over the last two years she bought most of the groceries, cooked almost every meal, did most of the laundry and cleaning, drove both dependents to almost every one of the 300+ doctor appointments, sorted tens of thousands of pills, and made sure they were all taken on time at every hour every day.
And she did this when she herself was diagnosed with cancer 6 months ago.
When she was getting a mastectomy.
When she is going through chemo.
She hums when she works.
She talks to herself when there’s no one to listen, and she goes about every day with humility and grace.
I took this photo before I left work this morning.
She didn’t know I was there.
This, friends, is what greatness looks like in a quiet moment. Waiting on oatmeal to cook for her daughter for the 300th time since she got sick.
Not everyone gets to have a real-world superhero in their lives.
And for this I am filled with gratitude every day.