I'm not sure why Memorial Day hit me with such force this year. Perhaps it's because I've taken the time to really think about why we have it. Somewhere over the years I've lost that it was meant to honor the men and women who gave their lives so I could enjoy all of the freedoms I mostly take for granted. It wasn't that way when I was a kid. My father was in World War II. He wanted to serve his country more than anything, but he had a bad heart due to Rheumatic Fever and also suffered a football injury to his left eye that impacted his peripheral vision. The war was practically over when the draft board finally accepted his papers. Since he couldn't go directly into battle, he became a military policeman who rode the trains back and forth across the country looking for the draft dodgers and deserters who had failed to do their duty as an American citizen. Then he received specialized training as a medic and spent some time on the Del Monte Pineapple Plantation in the Philippine Islands treating soldiers so they could come home. The sad part was that most of them suffered from venereal diseases rather than being wounded.

He always respected the flag and what our country stood for and taught his children to do the same. I'll never forget the flag my mother was given at his funeral or the gun salute that still causes me to shiver with each blast. I was thirteen and old enough to remember how dismal and frightening life had suddenly become. Never again in this life would I hear his melodious deep, base voice or climb onto his lap for a hug or a kiss. Since the cemetery was only a quarter of a mile away from our home, I rode there on my bike, or walked, many times over the years to spend time with him. And Memorial Day was always spent visiting cemeteries and placing fresh cut lilacs, tulips and peonies on the graves of our loved ones. The flowers were mostly put in glass canning jars with rocks at the bottom to keep them from toppling over. We were too poor to go to the story for plastic ones.

Many years have come and gone since then. I've moved a number of times, mostly farther away from where I grew up, and have only been back to the old Milo cemetery a time or two. Time went by so fast, all the older generation passed beyond the veil of mortality and I let what Memorial Day had once meant to me get lost in the more fashionable things the people around me were doing. It became a time for extra yard work, going somewhere for pleasure or, if I happened to live close enough to family, a time for barbecuing, playing and talking. Little to no time was ever spent recalling things from the past that should still matter as much as they once did.

I suppose that's why this poem I once wrote about the Army blankets I grew up using as a child came back to me this morning. I had forgotten them like so many other things. I'm sharing it with you because the past should never be forgotten. It should live on, through us, in the hearts of the generations who will come after.

Scratchy, wool, army blanket,
What is your story?
Did you shelter soldiers
fighting for other’s freedom?

Did you warm civilian bodies

against the fear and the cold?

Did you wrap the remains of those who

had given all for the truths they held dear?

Did you shield a small, helpless infant

against the wind and rain?

Or did you lie quietly on a self

until the war was at an end?

I wish I knew your story

But since I don’t, I’ll tell you

how you were used in my childhood home.

None of us wanted to touch you

since your surface was so very rough,

but you hung in the doorway on Christmas morn

so we couldn’t see our Santa stuff.

You traveled for picnics in the yard,

the orchard or the mountain heights.

Draped over chairs you made new worlds, and

were ever near when the night became chill.

Your holes were ones of careless acts

since mostly children put them there.

You see, we didn't understand where you

came from or your incredible worth.

It would be nice to thank you

for all the service you have given, but

you’ve been gone for so many years
I have almost forgotten your existence.
Still, it's hard not to recall the smell of wet wool,
the dusty green color so unlike any other,
and the stories of people thanking God
for even having you around to bring them warmth.
Those things, and many others,
have made me a more compassionate person.
I almost wish I had one now so I could share it
with the generations who have never even seen one.
I conclude this post with something I read yesterday. It touched my heart and gave me even more reason to reflect on what I am willing to sacrifice for freedom. 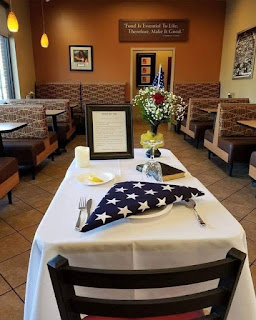 The Missing Man Table
When you see the table of the ones who have not returned, this is what it means. Please take a moment to respect those it represents.
•The Cloth is White- symbolizing the purity of their motives when answering the call to serve.
•The Single Red Rose- reminds us of the lives of these Americans, and their loved ones and friends who keep the faith, while seeking answers.
•The Yellow Ribbon- symbolizes our continued determination to account for them.
•A Slice of Lemon- reminds us of the bitter fate of those captured and missing in a foreign land.
•A Pinch of Salt- symbolizes the tears of our missing and their families who long for answers after decades of uncertainty.
•The Lighted Candle- reflects our hope for their return- Alive or Dead
•The Bible- represents the strength gained through faith in our country, Founded as One Nation Under God, to sustain those lost from our midst.
The Glass is Inverted- to symbolize their inability to share a toast.
•The Chair is Empty- They Are Missing.