The hottest and driest June and July in recorded history in Utah is finally over, and I can't tell you how happy I am. Don't know what August will bring yet, but we had a little rain the night before last and today it only got to 90. I think I've been down in the dumps since the heat wave started. My lawn and flowers started out so beautifully this spring, and the garden came up without being hit with a late frost. But as the temperatures climbed and the worst drought ever hit us, I had to watch all the vegetation in the countryside turn brown and some of the leaves on the trees start to change color in the middle of July. Even some of my pumpkins  have turned orange, and Halloween is still three months away. It's discouraging to say the least, especially when water restrictions came and my lawn started to turn brown, then white and finally bare in spots. I was determined to keep my garden and flowers alive, but that was only because I watered them by hand faithfully every morning.

The only thing that saved my sanity was doing something for my grandmother who has been gone since I was nineteen. She was my champion, my best friend and the only one I've ever had to turn to. When my little brother was hurt and my entire family displaced, I went to stay with her. I was reeling with pain and grief, believing I was responsible for him being in a coma and ending up with partial paralysis for the rest of his life. For those who haven't read some of my earlier posts, I was five and he was three when he wandered into the field and my father accidentally ran over him with a tandem disk. My mother told me it never would have happened if I had been watching him. That chastisement has been like a cancer festering inside of me my entire life.

My sweet grandmother took me under her wing, played the piano for me, told me countless stories and fixed the most marvelous food. She let me help her do the laundry in her old wringer washing machine, hang clothes on the line, press apple cider in the orchard, learn the art of using rags to curl my hair and offered every diversion possible to keep me from falling apart. But most of all, she taught me to love the printed word. I owe any writing ability I may have acquired to her tutelage. She spent a good portion of every day with the stub of a pencil in her hand, that she would moisten with her spit, and any piece of paper she could find. Her mind was always ablaze with ideas for readings, stories or books, and she knew exactly what each scrap of paper contained.

She only had one story published in the London Mystery Magazine, but I was blessed to be given two of her manuscripts when my mother died. I've sat on them for nearly twenty years. I suppose having to provide for myself and my children was partially responsible, but I guess I had to be ready to read them and life had to slow down enough for that. I'm glad that time finally came because her book is one of the treasures I have guarded carefully through several moves and many challenging life experiences, only reading the first few pages until I decided it was time to share it with the rest of Great Grandpa and Grandma John Bowker’s posterity. It is impossible to know just how much is factual, and what has been embellished to make it more enjoyable to read. But after I started typing and watched the characters come to life, I knew it was mostly a biography of their family and the people who lived in the small township of Blackfoot, Idaho around the turn of the twentieth century. Without question, some names have been changed to protect the innocent since it is told from my grandmother, Viola Bowker Ririe’s, point of view. But even in my limited memory of the ancestors I knew before their deaths, it was easy to recognize certain family members.

In it, she calls herself Tamsin. It’s a name she used in some of the stories she told us as children as we sat around her knees in utter amazement at how perfectly she could mesmerize us for hours. Many tears came to my eyes as I put her words on the computer. Perhaps part of that was because my brother, Sandon, who died the day after Thanksgiving, 2020, looked so much like Great Grandpa, and I miss him terribly. But it couldn’t have been easy living without running water, indoor plumbing, electricity, telephones, adequate medical care, or even being able to contact neighbors in a hurry if the need arose, but it attests to their strength of character, endearing flaws and the great love they had for family, God and country. I get emotional just thinking about all the luxuries and ease we have now and how little so many of us appreciate the people who gave us everything we have, including our DNA.  It makes me want to start working on family history again.
Today, I finished that project and even had the courage to try my hand at designing a cover. I hate to admit that I have no artistic ability, but cover design templates available on the Internet give some of us a chance. I can't say that it's good, but I know my grandma would love it, if only because she loves me. I decided to include the synopsis for anyone who may be interested. The book is titled "So Long, Bishop", and it will give any reader something to think about, along with some laughter and a few tears. It will be available on Amazon as soon as it clears the review.

John Bonner knew what he wanted, and it wasn’t driving a freight wagon across the sage-covered, inhospitable desert of Southeastern Idaho for the rest of his earthly existence where his only companions were coyotes, rattlesnakes, jackrabbits, ground squirrels and an occasional sheepherder who wanted to be left alone. His desire was to become a landowner, but in his zest to claim the life he wanted, he made an uncalculated mistake. He became engaged to his benefactor’s willful daughter without falling in love first.

While he was determined to do the honorable thing and make good on his commitments, he didn’t take into accounting meeting her cousin, the bright-eyed, enchanting, Rosella May Wilton, who had just returned to the valley and immediately captured his heart. With the elaborate, and much anticipated, wedding only a few weeks away, he was at a crossroad where his next decision could literally cost him everything he hoped to have. While he was trying to make up his mind, all the while knowing he had nothing to offer anyone but an old wagon, a team of horses and his two hands, a spark of true genius hit him. But would the parties involved be agreeable? It was time to find out.

I'm concluding this post with a poem I saw on Facebook a week ago. It reminded me that mountains don't always have to be scaled. Sometimes, it's perfectly okay to climb a hill instead--even if that hill is just getting out of bed. 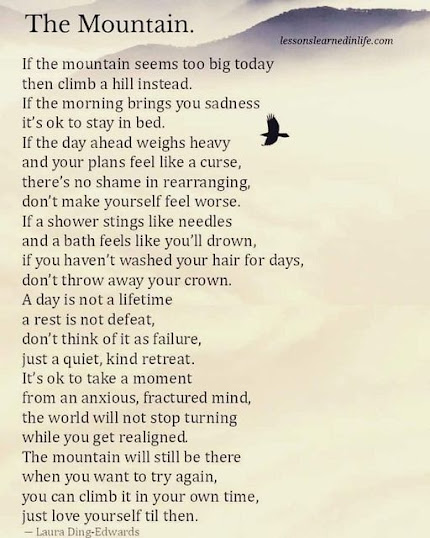