Many of you have been following my rantings about doctors, hospitals and such the past few months. I'm not saying that I'm doing a whole lot better when it comes to the issues that were plaguing me when my journey began because most of the symptoms are still there, along with an acute nausea that hits me most mornings and last until early afternoon. Not sure what is going on with that, but I'm determined to turn things around with a more positive attitude. That's not to easy to do right now since it was 100 degrees yesterday, it's only the 14th of June, and we haven't had any rain for over six weeks. We're down to 17 percent in the reservoirs and restrictions on water usage are already being put into place. To say that it's going to be a long, hot summer is an understatement.

To let you know just how bad it is even in town, my son was sitting at his desk in a bank where he's a loan officer last week and the lawn in front of the restaurant next door burst into flames it was so dry. No one knows for sure how it happened, but it is a prelude to what we have to look forward to as the heat continues. I went out to do a little weeding early yesterday and was so sick when I came in that it took a couple of hours until I could even move about without feeling sick. Summer has never been my favorite time of year, but I'm afraid that this year it's going to be even harder to find something exciting about it. Of course it might help if I was going somewhere, but work will keep me here until September when I'm going back to see my sister again. (It's just no fun to travel alone when you're older and basically become a backdrop to what everyone else is doing.)

Nonetheless, I do have one piece of good news. I've finally finished my next book. It's the last of the four I completed the first draft too when I was in my thirties but never had the time to complete with all the responsibilities that come with family, work and home. But waiting until life had given me more experience to draw from made it more believable and real since most of us have dreams we wish we had captured while there was still time. Like the heroine in Kismet Finds a Way, this book is semi-autobiographical since I fell in love wth a special someone I have never forgotten when I was in college too. It gave the song Reunited by Peaches and Herb new meaning because I dreamed for many years what it would be like to see him again. But I'm sure that reality would never equal what I have experienced in my dreams. So I wrote one of the scenarios about a possible meeting where we could rekindle what had been lost. Is there anyone out there who has some of the same fantasies I do? I think it makes us human because love is the most driving force in the world, especially for those of us who have never found it.

I guess that since I've been alone for over 20 years it's not so bad to have a few lost dreams since it means I used to have a life where love was always a possibility, and I could feel things I have never experienced. My marriage did not bring peace, fulfillment or a reason to be myself and explore what most women long for. Fear, putdowns and never being good enough were what marriage meant to me, and I really envy women who have been truly loved by a man because that has never happened for me. Perhaps that's why my first publisher told me I needed to learn how to write love scenes - not steamy, explicit ones because they take all the romance out for me and are not something I am comfortable doing - but tender passion that shows what true joy in a loving relationship should be. It's hard to write about something that has never been experienced, but I still know what I would like to happen before this life is over. However, I am realistic enough to know that men anywhere near my age are looking for women 30 years younger.

Anyway, enough of that. I doubt any of us need a reason to feel down because life gives us enough reasons without  looking for them. But I am proud of Crossfire at Bentley. I think you will enjoy this story. Here's a quick synopsis. Happy reading for those of you who enjoy it, and for those who don't, have a wonderful day anyway.

Jada Sloan spent four years at the university in love with a professor – seven years her senior - who hopped in and out of her life and made her feel like a queen. But he was never ready to settle down with just one girl. Ten years later, after a rocky road to success and a failed marriage, she found herself back at Bentley as a guest lecturer. But a new friend, a conspiracy and a chance encounter with her old flame threaten to destroy her now well-ordered life. Will she find the inner strength to let go of her past or become part of a puzzle no one seems capable of solving? Only time, and a great deal of understanding and patience will tell. Jada thought her past was complicated, but it was a breeze to what she is facing now.

Crossfire at Bentley is available starting TODAY on Amazon at https://amzn.to/2BXNSdvin both print and Ebook formats. It’s been a real labor of love. 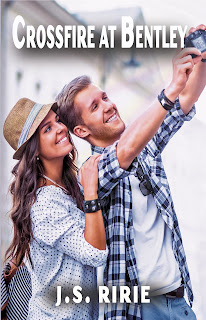